Thanksgiving has come and gone, and before we start to focus on Christmas, I thought we should have a little “how was your Thanksgiving?” discussion time. Recipes tried, recipes to never try again, funny stories, horrible stories, and everything in between.

Posted in Uncategorized. Bookmark the permalink.

A few weekends ago we finally completed our porch project. It rained the beginning of last week and then we were into holiday time and I didn’t get around to taking a decent picture until just the other day. Here she is: 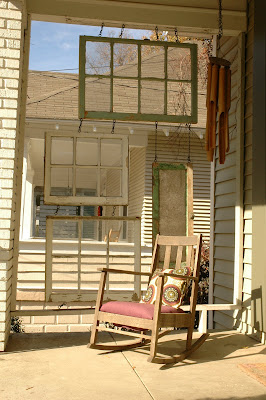 It took a couple trips to hardware stores to get all of our supplies. We bought eye hooks, chains, and links to pull it off. I also spray painted the hardware so that it wouldn’t be so noticeable. At dusk it looks as if the windows are actually floating.

In the beginning I just wanted some sort of barrier there so I didn’t feel like someone was going to jump through the opening at anytime. But now I love the design and how much light it lets in compared to the trellis we had before.

We are super happy with the results and being done with another project!

In college I got really into Friends. I bought all the seasons on DVD. While I don’t watch them all the time anymore, I have one yearly tradition in which I bring them all out. Thanksgiving.

Season 1: The One Where Underdog Gets Away
Everyone would rather be somewhere else, Monica has a meltdown, and Underdog gets away.
Favorite moment: When Monica and Joey split a grilled cheese sandwhich, Joey wishes for the large half.

Season 2: The One with the List
Not really Thanksgiving-y so I usually skip it.

Season 3: The One with Football
Monica and Ross bring up old childhood rivalry over the pigskin.
Favorite moment: When Rachel goes “really long” and gets a pretzel. I’d totally do that too.

Season 4: The One with Chandler in a Box
To try to salvage their friendship Chandler spends Thanksgiving in a box.
Favorite saying: His reasons were threefold. I say this all the time.

Season 5: The One with all the Thanksgivings
This is my very favorite Friends episode. I won’t spoil it for you.
Favorite moment: The whole episode is classic, but if I had to pick it would be Rachel and Monica rubbing weird things on their body trying to be sexy. I also do this all the time… not really, but it’s happened a few times. Nothing turns my husband on more than rubbing a mac and cheese box on me.

Season 6: The One Where Ross Got High
When Monica’s parents spend Thanksgiving with the friends it comes out that Ross blamed Chandler for his getting high.
Favorite moments: Phoebe’s obsession with Monica and Ross’ dad and the traditional English trifle.

Season 7: The One Where Chandler Doesn’t Like Dogs
Eh, this is my least favorite of the Thanksgiving episodes. Chandler doesn’t like dogs and Phoebe is secretly dog sitting in the apartment.

Season 8: The One With the Rumor
Brat Pitt spends Thanksgiving with the gang. One of my top 10 favorite episodes. He hates Rachel Green.
Favorite part: Brad Pitt

Season 9: The One With Rachel’s Other Sister
Rachel’s other sister visits and Chandler convinces Monica to use their wedding china.
Favorite moment: the last scene where Chandler breaks all the plates.

Season 10: The One with the Late Thanksgiving
The bittersweet last Friends Thanksgiving. Everyone is late causing a riff between the Bings and everyone else.
Favorite moment: The floating heads.

What is your favorite Friends episode? Do you have a Thanksgiving tradition?

Posted in Holiday!. Bookmark the permalink.

A few years ago, my then roommate and I bough a little butcherblock topped cart to put in our dining room for extra dish storage. We always said we’d redo it, because it looked like this:

Yeah, nothing to write home about, but we were poor and it was about $10.

Fast forward to this summer, when Josh and I moved into our current home, and the cart became our coffee bar. It was perfect for the awkward space in our kitchen, but still not pretty.

So, I cleaned it out

Dragged it outside and spray painted it a lovely blue, which resulted in my looking like I had blue freckles all over my body and blue grass

And added pretty new handles from Anthropologie (which required Josh to drill new holes in the metal doors. What a man!)

Since Rachel asked, I decided I should post this recipe, especially since I’m pretty sure I’ll be making them for Thanksgiving too.

My sister and I have been making these for years, adapted from some super fancy bacon wrapped green bean bundles. Forget the bundles, and just mix together a big pan of these. Everyone will thank you.

Granted, these are a true Southern vegetable in every since of the word, meaning they have loads of fat and probably zero nutrional value whatsoever.

Yes, Thanksgivings because I’m so thankful I have to celebrate it three times. Not really, I’m sort of horrible that way.

The last couple of years I’ve hosted my husband’s (and sometimes members of my own) family for Thanksgiving. I was initially pretty nervous about having the pressure of The Turkey on me, but I enjoy having family over and providing a lovely meal for them. It’s one of my love languages, lovely meals. One of the lesser known love languages. I’m special like that. 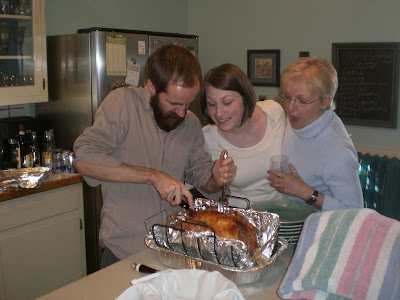 This year my sister-in-law wanted to host and who was I to stop her? I don’t have to clean my house! Hooray! But first we have to go to my grandparents house for Thanksgiving with my family. Two thanksgivings, one day. I’m willing to sacrifice my waistline for family.

I’m not coming empty handed. I plan on making the following:
– Roated Feta with Thyme Honey as an appetizer
– Allyn’s Sassy Green Beans (Which she needs to post here at some point)
– pumpkin pie (which I’m going to make two of and eat one for breakfast while we watch parades… it’s our little secret)

I won’t lie, the masochist in me was really disappointed that I don’t get to cook a turkey and have to figure out what to do to use it all up before it goes bad. I want leftovers, damnit.

So I decided to have my own Thanksgiving meal with all my favorite foods. Here’s what I’m making for Fakesgiving:

– Make ahead turkey
– Brussel sprouts and bacon
– Mac and cheese
– My grandmother’s green bean casserole
– some form of sweet potatoes, either in gratin or scalloped
– Pecan pie

What are your favorite Thanksgiving dishes or traditions? Are you have just as many Thanksgiving meals as me? Am I crazy?

It’s a well known fact that Josh and I love to travel, so we’re super excited that we’re going on a trip after Christmas! Hooray!

We have some Delta vouchers we need to use (from when they screwed up our flight to Shanghai last winter. Sigh.), so we started thinking about where we wanted to go that wouldn’t wind up costing us a fortune in other expenses, but was somewhere fun and awesome.

The amazing solution? Boston and NYC 2011!

Josh’s mom and grandparents live right outside of Boston, where I’ve never been, and one of my best friends from high school lives in NYC (yay Whitney!), so not only do we get to stay for free (holla!), but we also get to see people we love and rarely get to see, aaaaaand Whitney finally gets to meet my husband. Oops.

Whitney and I, Brooklyn Bridge, Fall 2010

So now, I’m begging for things to do/awesome places to go eat, especially in Boston! We’re going to be focusing on mainly finding legit Asian food in NYC, since that is nonexistant here in TN, but we’re really open to anything.

So please, list your favorite coffee shops, hole(s) in the wall(s), bars, and must see places, no matter how touristy or cheesey they might seem.

Anyone else with fun holiday trips planned?